In 1967 Richard T. Saunders broke ground on the Richard T. Saunders Funeral Home at 495 Park St. in New Bedford. This funeral home was a large spacious facility with ample off street parking centrally located in the West End of New Bedford. In 1985, Daniel F. Dwyer, a well-respected local funeral director, merged his funeral home with Richard's to create the Saunders-Dwyer Home For Funerals. In 1996, our new Mattapoisett facility was opened to better serve the needs of our expanding clientele.

Years later, two of Richard's sons joined the family owned and operated business as licensed funeral directors, Richard T. Saunders, Jr. in 1984 and William H. Saunders in 1990. Since the death of their father in 2008, Rick and Bill have continued to operate this family business in the same professional manner that their father had followed throughout the years. Together they lead an impressive team of funeral directors, embalmers, administrative staff, and funeral assistants, in order to provide excellence in funeral service to all of the families that they serve. 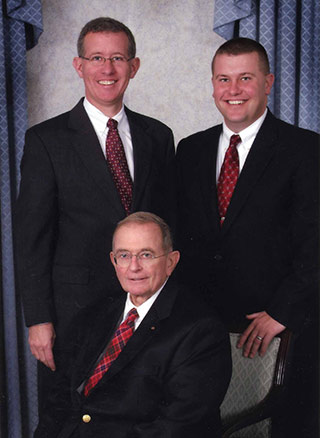 Richard, the founder of our family owned funeral home, died on November 30, 2008. He received his Funeral Director’s License in 1963. He was a graduate of Monsignor Coyle High School class of 1951, Boston College Class of 1955, and Worsham College of Mortuary Science Class of 1961. Throughout the years, Richard was involved in countless religious, civic, political, and philanthropic endeavors both locally and globally. He is survived by his wife, Anne (Downey) Saunders, M.D., his eight children, Rick, Marie, Andrew, Maureen, Ellen, Mike, Bill and Chris, and 17 grandchildren.

Rick received his Funeral Director’s license in 1984. He is a graduate of Bishop Stang High School, Class of 1978, Bridgewater State University Class of 1982, and the New England Institute of Applied Arts and Sciences, Class of 1983. An active member of St. Mary’s Church in South Dartmouth, he serves as a lector, Eucharistic Minister, St Vincent dePaul Society member, and Finance Council member. He is a director of the Sacred Heart Home in New Bedford and served as a director of the Massachusetts Funeral Directors Association, completing his three-year term in June 2019. He has served for over twenty years as an elected Dartmouth Town Meeting member. A resident of Dartmouth, he is the husband of Kathleen (Kennedy) Saunders; they have three sons, Jim, Patrick, and Chris, and three grandsons, James, Luke, and Jude.

Bill received his Funeral Director's License in 1990. He is a graduate of Bishop Stang High School class of 1988, College of Boca Raton, Funeral Service Program, class of 1990, Lynn University, class of 1992. He is married to Myriol B. Saunders and resides in Mattapoisett. They are the parents of two children, Will and Tim.

Will received his Funeral Director’s License in 2019. He is a graduate of Bishop Stang High School, class of 2016 and is the first graduate of the newly formed Cape Cod Community College Funeral Service Program to receive his license. He is married to Casey L. (Allaire) Saunders and resides in Fairhaven.

With a growing family and a growing business, our family now and in the future looks forward to assisting your family in the days and years to come.

"Our Family Serving Your Family"